A new collection of short stories!

“It seems like everybody but people from here are sure about what we’re about, and they make money being wrong about it.” The residents of Labor County, a fictional small community in the mountains of southeastern Kentucky, may be short on cash, but they are rich in creativity and tirelessly inventive as they concoct new schemes to make ends meet, settle old scores, and work off their debts to society and, in a way, to themselves.

A zealous history professor is caught stealing from the local museum in protest of petty theft; an arsonist strikes it lucky—twice; a skilled leatherworker saddles a turkey and finds a rider; an angel aspires to be a punk rock Roller Derby princess; a grieving artist carves a miracle into a roadside rock face; and affable Uncle Archie produces a seemingly unending supply of new and bizarre items to display in his Odditorium.

​More than a collection of tales, Working It Off in Labor County assembles memorable characters who recur across these seventeen linked stories, sharing in one another’s struggles and stumbling upon humor and mystery, the grotesque and the divine, each in many forms. 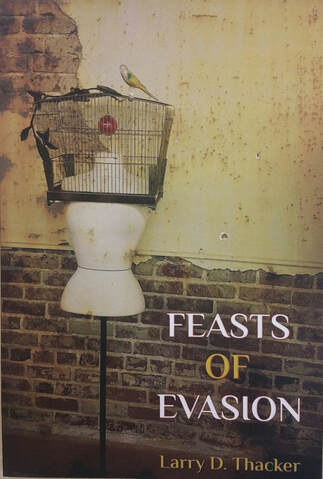 Poet and artist, Larry D. Thacker’s third full collection of poetry, Feasts of Evasion, walks hand-in-hand with us into the daily lands of both the mundane and the mind-blowing details of living. That “there is poetry everywhere, in the make-up of everything, within everyone” Thacker would have us remember, how we find it is as varied as finding stillness in the train horn, the kudzu vine, the lonely hospital prayer book, or a few seconds at a fume-ridden intersection. Called “fierce and fearless” poetry by poet Mary Carroll-Hackett and “a necessary book” by writer Karen Salyer McElmurry, Thacker’s work once again invites readers to live a double life, adding a new set of eyes for living. 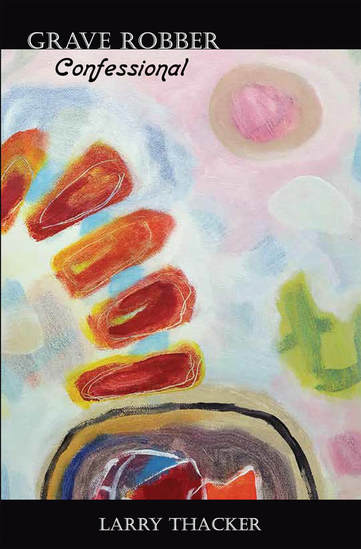 GRAVE ROBBER CONFESSIONAL is out!, Orders are available through the Main Street Rag Publishing website ($14). Here's the link for purchase details, blurbs, and a few sample poems: https://mainstreetragbookstore.com/product/grave-robber-confessional-larry-d-thacker/

In Grave Robber Confessional, death is an obsessive and compelling preoccupation, Thacker’s gaze candid, ironic, amused yet soberly aware. The communities of the living and dead commingle, each with its own key to the cemeteries abounding here. These fine poems are rooted in the fleeting but sensual stuff of the world: body and bone, ash and clay, mountain and crow. The poet’s hands read the inverted “brail” of the stones, our own names soon enough. — Gaylord Brewer

​In Grave Robber Confessional Larry Thacker encourages us to embrace death in authentic and tender poems that proclaim collectively: “Everywhere we step, death / hums an old, intimate song.” These poems visit boneyards and haunted houses, but also attend to some familiar markers of Thacker’s voice: loss of homeplaces, of communities, of fairness. Thacker has created poems with poignant melodies, gallows humor, and a confidence derived from understanding the essence and boundaries of our existence. ~ Marianne Worthington, co-founder & poetry editor, Still: The Journal

In this beautifully crafted, multifaceted narrative that examines the ultimate human curiosity, Larry Thacker persists in piercing the “stubborn membrane” of obsession and passing—people, land, tradition, loyalties, memory. And yet, this collection of characters, places, and perspectives is as light as  it is dark, as hilarious as it is poignant, as enlightening as it is necessarily opaque. While we travel his liminal landscape, the ghostly become gift and our blind  future curiously seductive. -- Darnell Arnoult, author of Galaxie Wagon and What Travels With Us 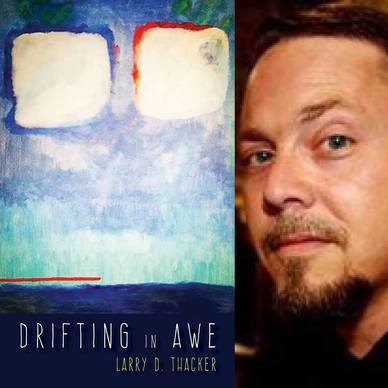 The poems in this resonant book offer a strong, hands-on encounter with the world as it is, with the weather, geography, the trees, our fellow creatures.  Attending to the muscular and physical realities of the local world, however, rightly leads these poems to the lesser-known and less-certain wonders of the metaphysical, to the apprehension, as far as the mind can reach, of a meaning beyond the limits of physical knowledge.  What’s out there beyond the fog rising in a cove?  What questions should we ask, only to voice them, knowing they have no ready answer?  That strange little paradox is why we have poetry at all, and here is a fine book to prove that point, with elegance, and with elegant reserve.

–Maurice Manning — Author, Lawrence Booth’s Book of Visions, Bucolics, The Common Man (finalist for the Pulitzer Prize in poetry), and The Gone and the Going Away.


Larry Thacker writes of the natural world and what hovers on the edge of consciousness. Entities “seen in the corner of the eye” or “the sound of the sun” might manifest if one becomes still enough to see and hear. Drifting in Awe, gives us a manual for doing just that. In his first full length collection, Thacker invites us to be still and let that world come to us if we are brave enough.

–Jane Hicks — Author, Blood & Bone Remember (Appalachian Writers Association, 2006 Book of the Year) and Driving With the Dead (Appalachian Writers Association, 2015 Book of the Year).
​
Larry Thacker’s poems set about the difficult business of reconciling the seemingly irreconcilable: death & life, darkness & light, summer & winter, distant histories & the yet-to-be.  As yet, somehow, he succeeds. Perhaps the secret is in the tenderness of Thacker’s attention, for these poems have as much regard for the dried-up earthworms on the sidewalk as they do for the spiraling arms of our galaxy, and they are both unapologetically masculine and unsentimentally affectionate.  As much the child of Jack Gilbert as Ted Hughes, Larry Thacker is a poet in love with the world – warts and all – and in Drifting in Awe, he convinces us to love it, too.
​
–Doug Van Gundy — Author, A Life Above Water and co-editor of Eyes Glowing at the Edge of the Woods: Fiction and Poetry from West Virginia

Order Drifting in Awe from Finishing Line Press or from the author. 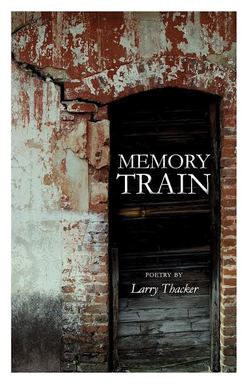 Order Memory Train from Finishing Line Press, Amazon, and the Author. Contact the author at mountainfocusart@gmail.com for reading and signing events.

Memory Train, a collection of poems by regional author and artist Larry D. Thacker, travels an extensive range of internal and external emotions, threading in elements of life and death, using the language of landscape, reaching out for the natural world we can see and mysterious worlds that escape our understanding. This is a journeying collection.

“These poems are a continued dance with learning who I am and who we are as early 21st century Appalachians and people,” says Thacker. “Some of my poems serve as prayers for understanding, some express frustration, some with our special relationship with our natural surroundings. All are rooted somewhere in the mystery of life behind the scenes of our daily lives, a place that often demands my attention in my writing.”

As a seventh-generation Cumberland Gap are native, Thacker’s writing over the years – whether through columns, fiction, or poetry – has served as a cultural balm of sorts, helping him, and hopefully others, better understand the history of the Appalachian experience and our place in that ever-changing landscape.

This is Thacker’s second book of poetry, his first being Voice Hunting, published in 2011 (Finishing Line Press) as well as Mountain Mysteries: The Mystic Traditions of Appalachia (2007, Overmountain Press). His opinion column, Mountain Musings, was a regular feature of the Middlesboro Daily News for a number of years and he had blogged for a time with the Seattle Post-Intelligencer.  He is founder of the community writers group, Creek Side Writers. The group meets each Thursday at the Gap Creek Coffee House in Cumberland Gap, and everyone is invited. Thacker and his wife, Karin, split their time these days between his hometown of Middlesboro, Kentucky and their home in Johnson City, Tennessee.

Larry Thacker has written a set of poems so rich and muscular in its music that readers will think of the best of Ted Hughes, or of early Seamus Heaney. The poems in Memory Train convince us that they are inevitable as the forces that drive people into action. The voices here search for truth, and for understanding, “addicted to the night/-dream of making sense of it all,” as one poem calls it. Thacker reminds us how to love the difficult places we come from, and how to live there in the real present, not a misty-eyed version of the past. We are given the world as it is, for better or for worse, and Larry Thacker has turned it into a song that will stick in my memory for a long time.

In Memory Train, Larry Thacker’s voice veers from the gothic into the romantic, from realism into naturalism, from telescoped metaphors to the hard, blunted truth. His language amplifies the quotidian—but more than that, his poems never squint away from the bright realities of danger and blood, of shadows cast through the lens of narrators who not only accept what is butmake it. His poems have a way of distancing the reader and then pulling them in close—a voice confident, unafraid, and lambent with intelligence. In “A rainstorm’s first notes,” the narrator sees vines in the garden “thickened / on a phone pole / shaped up / out like / a crucified body, a hanging watch, / leafy conductor.” Full of Dickinsonian layers and a language often as ecstatic as Dylan Thomas, Larry Thacker’s new collection is one I will read again and again not merely for chances to delight in its language, but for the wisdom thrumming through nearly every line.

“Leave your hate behind. It hurts and kills,” writes Larry Thacker in his collection Memory Train. And that’s what Thacker does: whether he’s exploring the complexity of one’s relationship to the landscape (both interior and exterior) of the past, or inhabiting the voice of a government interrogator, Thacker moves us through arresting and urgent poems that seem always to be seeking the compassionate, human side of our common experience. “Your own imagination is my sharpest tool,” states Thacker, and with fine craft and exquisitely rendered emotion, he enters our minds and hearts and leaves us imprinted with poems that tell us what it means to lose and to find.”

–Aaron Smith
Author of Blue on Blue Ground and Appetite 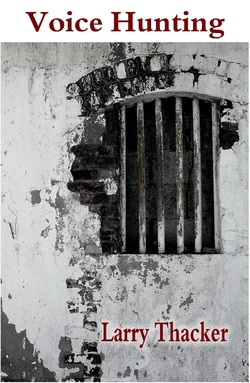 Larry Thacker as poet practices a kind of "Appalachian alchemy" as he searches for the poetic elixir that will turn our eyes and ears from the commonplace to the unexpected. His poems are hymns to birth and death, psalms for the seasons, and lamentations for the environmental destruction that wrecks his mountain homeland...He probes the "mythic dark matter" of Appalachia with new rhythms, "hunting the warm memories" as he "whispers and sings the secrets" of his birthplace. What a magical power he brings to these debut poems - and alchemist indeed.
-- Marianne Worthington, author of Larger Bodies Than Mine

All the poems in Larry Thacker's chapbook...have their throats cut, their truth pouring out like last words. The immediacy in these poems reminds me of the work of Dave Smith, especially their mythic sense of place and zeniths of experience. This collection abounds with admirable qualities. I recommend it to all who have a love of the lives and sensibilities of a very special place, Appalachia.
-- Ron Houchin, author of Among Wordless Things

Voice Hunting chronicles a Generation X Appalachian's search for identity. In a world where television homogenizes culture, Thacker examines the duality of his generation. Clearly identifying with many ways of his ancestors, Thacker speaks out about the atrocities of mountaintop removal and environmental destruction that not only destroy landscape but culture. The poems are moving and uplifting and the found voice is one worth hearing.
-- Jane Hicks, author of Blood & Bone Remember